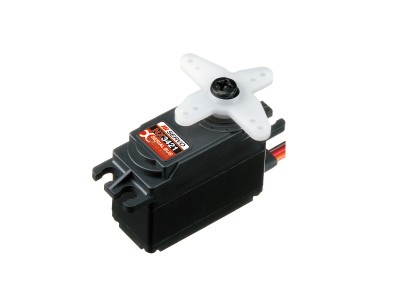 JR is pleased to announce the release of our new XBus NX series servos, allowing not only serial servo connection, but also individual servo programming with servo adjustments to suit every application.

When used on a JR XBus system, the NX series servos can be programmed in ways not previously possible. No additional programming device is necessary these servos can be setup using a JR XG series transmitter.

Changes made to servo programming are immediately apparent. Not only can servo direction and travel be adjusted, but it is now possible to fine tune servo gain, dead band and boost to suit your aircraft and desired response. This precise setup allows servo hunting to be eliminated and precise feel maintained.


For General use of RC air planes

* Do not use this servo under the different voltage other than specified
* If used on a large control surface - typically aileron, rudder, elevator or flap on an airplane, Digital servos (DS · MP · MPH series) may move slightly around center while on the ground.
This is an expected phenomenon, and will not occur in the air.